The Supreme Court is expected to rule on marriage equality and the legal status of same-sex couples later this month.

If the Justices vote in favor of marriage equality nationwide, all American same-sex married couples (not just those in the 37 states in which same sex marriage is already legal) could receive the same status and benefits as other legally married couples. Among the many financial benefits that could become available to same-sex married couples are the marriage benefits for Social Security. Those benefits provide an additional layer of financial security for older Americans—as much as $100,000 or more in lifetime Social Security benefits, depending on your unique situation.

Let’s unpack where those additional benefits come from.

Deciding how and when to claim Social Security can be complicated. It’s even more complicated for married couples, who can have thousands of strategies to choose from (no one ever said marriage equality was all champagne toasts and wedding cake). With so much at stake, it’s important that all married couples understand how to optimize this important benefit.

To show the financial impact the right to marry can have on a same-sex couple, we ran the numbers for a fictional couple — Henry and Logan. Approaching their 64th and 62nd birthdays, respectively, Henry and Logan are facing the decision of when they should claim Social Security benefits. They have been together as a couple for decades and live in a state that does not currently allow them to be legally married.

As it stands now, Henry and Logan can only claim their Social Security benefits as single individuals. If you’re single, claiming Social Security is relatively straightforward—the big decision you need to make is when to claim your earned benefit. You can take it as early as age 62, or delay taking it up to age 70.

Why delay? Well, for each year you delay claiming your benefit between ages 62 and 70, the government will give you a 6-8% benefit increase. If you delay claiming from age 62 to 70, you could have about 75% more money in your pocket each month. For most people, it can pay to delay.

Claiming Social Security benefits as a married couple (instead of as two single individuals) can increase additional lifetime benefits significantly—in some cases, to the tune of $100,000 or more. That financial bump comes in two forms:

Marriage can give a significant financial bump.

In our Henry and Logan scenario, the ability to claim as a married couple and receive spousal and survivor benefits would increase Henry and Logan’s lifetime Social Security benefits by $140,832 if they claimed right away at ages 64 and 62 and die at 84 and 90 (something impossible to predict in real life, but which we did for the purpose of this scenario). If they delay claiming their earned benefit until age 70 and take advantage of the additional benefits available to them through marriage, they could increase their lifetime Social Security benefits by an additional $202,176 (that’s a total of $343,008). That’s real money, and could mean the ability for Logan to stay in their home after Henry’s death and avoid slipping into poverty. 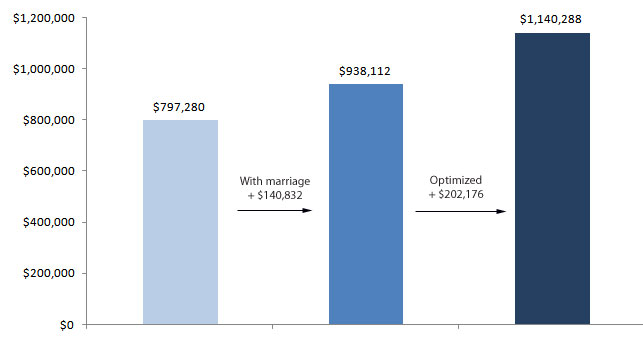 Check out the full scenario to see how much the right to marry improves Henry and Logan’s financial security.

Of course, we’ll need to wait for the Supreme Court ruling to see how Henry and Logan’s story ends (not to mention the stories of Anne and Mary and millions of same-sex couples nationwide). In the meantime, we created our easy-to-use Social Security planner to help you better understand your own and your household’s Social Security claiming options — regardless of what your household might look like. The planner takes into account all possible lifespan combinations.